When “thermal shock” inside a chimney flue creates a worrisome crack

“Everybody hear that? everybody see it?” 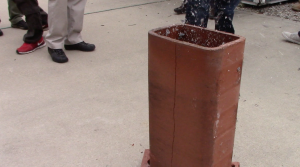 That’s what Chimney Safety Institute of America Instructor Michael Segerstrom tells 29 students as they react to one of the most anticipated demonstrations that are part of National Chimney Sweep Training School. The idea is to show chimney sweeps what occurs, often unseen, within the chimney flue that is responsible for venting smoke from fireplaces and wood stoves.

That scenario is a chimney flue fire.

Instructors use a single clay tile, common in masonry systems; they light a fire inside and watch as the heat builds up in the tile. The flames burned for about 30 seconds before self-extinguishing. But during that process, there is a clear “pop.”

MORE: See the video we took in March 2015 of a thermal shock demonstration.

“It gives you an idea,” Segerstrom tells the National Chimney Sweep Training School students. “We just put some crumpled up paper in there and lit it. It wasn’t even a creosote fire. It wasn’t an intense, hot burning 2,000-degree sudden occurrence event … But the temperature in there was enough where it heated up the inside surface faster than it could heat up the outside surface, so it caused it to crack.” 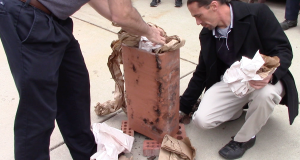 That’s why a clay liner in a chimney is not intended for combustion. It is intended to vent the flue gasses from the outside.

What was unique about this week’s demonstration is that the tile didn’t explode or break apart, as it has in the past. It stayed firm and began to close back up. Segerstrom was able to put a thin receipt in the wedge.

“Sometimes the tiles will actually explode [watch that video!] when we are out here doing the demonstration, but this is actually good. If  (during a routine inspection of  a customer’s home) the chimney is dirty a little bit on the inside we might not even see the crack, especially if it was from a recent event where there was no erosion or repeated expansion of it, it closes up and disappears. On the outside, you can see it but from the inside with a little bit of soot … you might not even see it.

“We want to keep a fire in the firebox and never let it happen in the chimney flue. So maintenance is really important. If a clay liner opens up like that, where that crack is , during a fire and there’s chimney right outside of it, and there’s improper framing clearances — 1 inch on exterior chimneys and 2 inches on interior chimneys during a fire, you could have heat pass through that crack and heat transfer to adjacent combustibles. During normal operation, it might not be as much of an issue … you could actually catch the house on fire during the chimney flue fire.”

The students tried to pull the receipt out of the tile and couldn’t get it out without ripping it. It was wedged in tight!

“If someone has a chimney flue fire and goes to use their fireplace if they haven’t had anything repaired when that tile heats up again that crack is going to reopen.”

MORE: What to do if you have had or suspect you have had a chimney fire  “If not a fire threat, performance issues are still likely if every tile cracks because you lose draft at the appliance, lost draft at the stove or fireplace as air is sucked through  the cracks every time it heats up. There’s also potential for flue gasses to pass through that crack when it heats up if there are other problems in the chimney – where smoke doesn’t want to leave so it wants to try and escape.”

At CSIA, we teach students how to recognize evidence of a chimney fire and how to approach fixing it (including documentation and potentially contacting an insurance company first!) Students also get to witness the effects of a full chimney fire scenario, including this new video, “Chimney flue fire,” also shot in March 2015 during the NCSTS.