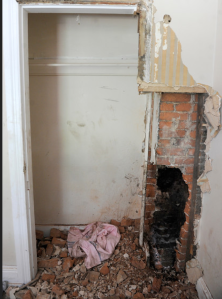 The fireplace isn’t a place to get stuck; guy blessed to be saved after falling into flue

A photograph of the masonry that rescuers had to reach to free a caught guy. Picture by @ydrcom
An image of the chimney that rescuers needed to reach to free a trapped man. Photography by @ydrcom
We have said it. It seems to occur every time. Somebody presumes the fireplace is easily accessible – a short-cut, in case you will, from the outside to the interior of a home. They understand the hard way. Missing Santa’s mystical abilities, they get caught.

It occurs more than you imagine.

In this newest scenario, people of the York County (PA) Sheriff’s Office were trying to serve warrants on June 12, 2015, when a man took off running over the roof of the building, in accordance with reports in the York Daily report. The man either jumped in or fell “deep down the chimney.”

Here’s how it was reported: